Fonts and images not showing

I am following this tutorial and I even copied the exact same code https://github.com/atheromar/QuickSDL/tree/master/SDLTutorial, and I am still not able to show any image nor any words. I am not getting any errors and I have already setup SDL_Image and SDL-tff in my proyect. I have another proyect setup the same way and everything shows up with no problem. I am using Visual Studio 2019 and x64 folder. Does any one have any idea why would this happen and without any error, because that’s the weirdest part no errors showing up? Any idea would be helpful, thanks in advance.

Below is the code where I try to write some words for my Start screen to begin making the menu. I also took a screenshot of the program just showing a white screen. 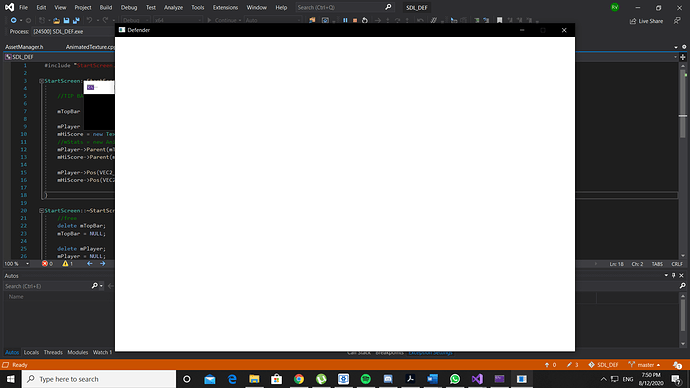 Hi, I’m not really sure that’s the real issue… But since you are using Visual Studio, when debugging, the program may be trying to get the Font file from the project folder instead of the x64 folder. Have you tried running directly from the .exe folder?

Either way, you could use SDL_GetBasePath to ensure you are getting the files from the right place.

Yes I already tried running the .exe folder and it shows the same thing. I also use SDL_GetBasePath just as you said to make sure its getting the files from the right place but its still not showing anything . I am suspecting it might be an issue with my VS settings or something