How To Publish A Linux SDL2 Game To Valve's Steam Game Client?

Can someone with experience explain the best method to
publish a Linux SDL2 game to Valve’s Steam game client?

Game is about ready to be released next month, but supporting Linux seems difficult.

You can grab the entire project on GitHub below:
https://github.com/SLNTHERO/TetriCrisis_4_110Percent_A.I._Turbo

Let us know, thanks!

Thanks for the information…

If I build the SDL2 game on my Linux(Manjaro KDE 64Bit),
will that executable run on ALL Linux distributions?

If you build it in the Steam Runtime SDK environment on that Manjaro installation, yes. If you don’t, it’ll require whatever version of libraries are currently on your Manjaro install, which may or may not work on a given Linux system.

Ok, got it…
We have some time to do this…
Game will release on Steam sometime next month…

Thanks for your help!

I managed to download the Steam Runtime SDK for Linux.
I am using “Manjaro KDE” Linux in a VirtualBox VM.

I downloaded the current build of the game on GitHub and loaded the project into Linux Code::Blocks.
I don’t know how to proceed…

I need to “#include” the Steam Runtime in game’s source but don’t know what to type.
Any help would be appreciated, thanks! 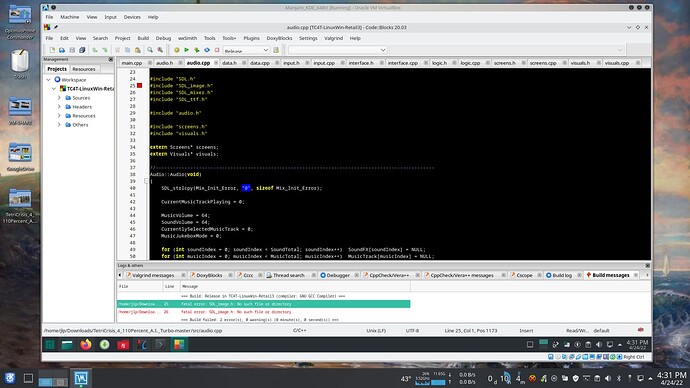