Are you still trying to build the SDL android example project? There should be a app/jni dir where you need to copy (or symlink) sdl into.

Yes I was just trying to build it as-is. Surely we still don’t need to go through that complication of creating symbolic links to SDL etc again? I went through that on the Mac when building using ant etc from the command line and that was really painful.

With Android Studio there should be a project already provided so people can just build it and ‘go’ without following long instructions. That’s what I would like to see in an ideal world.

Yes. I agree completely. I’ve actually made something like that, but I ran into some issues with gradle and android studio so it’s not 100% finished. And I haven’t even tried getting it into SDL yet

I’m just wondering whether to give LazyFoo’s tutorial a go now… I guess I’m more frustrated with the fact that I’m struggling to continue with my own project that uses ant etc. The big barrier I hit with that project was that I couldn’t figure out how to include various GoogleSign-in packages… and I struggle on the Mac… I thought installing Android Studio on Windows would be my silver bullet.

Try to Make the project and I get this:

Just read a StackOverflow post that claims my Java version must be wrong. The java.utils.Objects were only introduced with Java 7 so it says, but I should have Java 8. If I run from a command prompt:

However, Android Studio was using the embedded Java version. So… I tried changing it as follows:

So try a newer snapshot or the latest sources. There have been quite a lot of Android build braking changes lately so your mileage may vary.

Also if you update the gradle wrapper you probably need to change other things in the build.gradle also. See https://developer.android.com/studio/build/gradle-plugin-3-0-0-migration.html

In practice you need to add the google repositories and update the plugin version to the build.gradle in the root folder and change “compile” -> “implementation” in the dependencies in the app/build.gradle file.

Thanks. That link you said was consistent with what I had. Unfortunately the 2.0.8-11724 snapshot has rendered LazyFoo’s tutorial completely out of date. Importing the project from the 2.0.8 snapshot doesn’t even ask me where I’d like the destination project to be so I had to start guessing what to do from that point.

The jni folder seems to be expected as app\jni folder now instead of app\src\main\jni. The “Link C++ Project with Gradle” option doesn’t appear in Android Studio’s context menu anymore and all I can see in the Project window is an empty “cpp” folder.

I added the SDL2 symbolic link under the app\jni folder and I get these errors:

I am completely stuck now.

I’m sorry that I didn’t understand the last two sentences in your reply - if I’ve started a new project for 2.0.8-11724 then I’m guessing I would be using whatever version of Gradle/wrapper was defined in the snapshot.

Sounds like the linking is not done correctly. If you are on windows you can use something like:

Run that in the app\jni dir but change the last path to be an absolute path to you SDL. Also you need to do that from an admin command prompt.

If you linked to the correct place, entering the SDL dir you will see the root of the sdl sources

I haven’t looked at LazyFoo, but this is the simplest way to get the current version to work:

I just tried this with the latest sources and didn’t do anything else and it worked.

Later you can modify the app name/package etc. or update to newer gradle, but try to get this to build and run first.

Thanks for that. I think the last problem may have been the name of the symbolic link. LazyFoo’s tutorial assumes there is a link to SDL2. Your suggestion showed SDL (without the ‘2’).

I removed the SDL2 link, added SDL2 as below:

This appears to have moved forward somewhat. It started trying to build the “52_hello_mobile.cpp” source file. Unfortunately that failed due to not being able to link with the SDL library.

I still don’t know why the cpp folder is showing empty though. Its not very helpful that I can’t see the Android.mk and .cpp files. No doubt this relates to some gradle version or plugin. I thought the days of the ‘experimental plugin’ were gone.

I also clicked on “Remind me Tomorrow” for the below dialog:

What my problem be now? Should I have created a seperate project to build the SDL2 library itself?

…but I have no idea where that would be located.

Your listing still shows the SDL2 symlink. Make sure have deleted that because the project is setup so that it’s trying to build every subfolder in the app/jni dir.

Android Studio seems to not be able to sync the project because the build is failing. It will probably show the file once the build doesn’t fail anymore.

Maybe try deleting build and .externalNativeBuild from both the android-project and app dirs to clean any old stuff and try to rebuild.

btw. the SDL2 library is defined in the SDL dir you just symlinked. Like I said the project is setup so that it searches for Android.mk in each subdir. You can look at app/jni/SDL/Android.mk. It defines all the stuff SDL is building

That should be all you need to do. Did you try deleting build and .externalNativeBuild dirs and rebuild?

If I look at app/jni/SDL (which is the symbolic link folder), I don’t have an Android.mk at all. 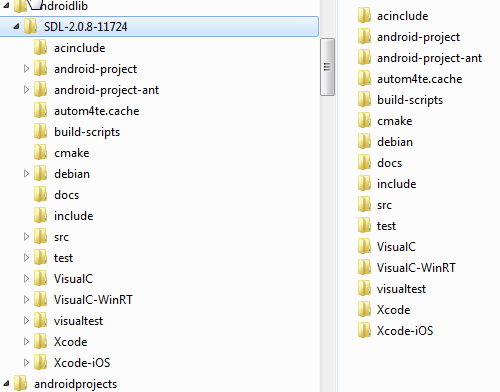 The only Android.mk that would exist would be underneath the android-project\app\jni folder.

Just to be clear, one of LazyFoo’s tutorial steps is to choose “Import Project…” This used to ask for a destination folder. With AS 3.0.1, it doesn’t ask for a destination folder. What I did instead was make a copy of the ‘android-project’ folder from the SDL snapshot and I put that under the C:\androidprojects\SDL folder. I could have called it SDLTest instead but I didn’t… 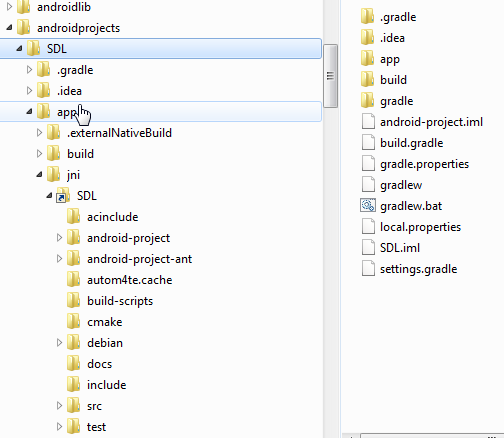 There should be a bunch of files in the root of that dir. including the Android.mk. I looked in the snapshot zip that was linked earlier and it certainly has them.

You are totally correct!

I remember thinking using ‘del’ was bad to delete the symlink. I thought mklink itself would have had an option to do it but no…

Wow! Something built and deployed this time. Black screen and immediate shutdown but I’m sure I can debug that.

OK. So I have yet to redo all of this on my home PC and ‘mobile’ laptop. I’ll repeat the process and make a tutorial out of it… which I may as well put onto this forum once I’m done.

Thanks for all of your help!

Next I’ll be back to the challenge of seeing if I can get multiple source and libraries to be included in AS… That will deserve another thread though if it happens again.

FYI, the reason my app is crashing is because of a missing hello.bmp file. I put this in the below folder but I bet that’s the wrong place:

Actually no - it ws the correct place, just needed a subfolder

All working and running on my S4 now.

Nice. It should not be quite this hard for a seconds time I hope

So basically just these steps should give you something that builds:

I still think that’s 3 steps too much and the sample project should be changed to build without any fiddling around like that.

Also I think you can delete symlinks from windows explorer and it should not delete the target dir.

Yeah it should have worked OK second time around but no… something different again. More Android Studio grief.

I’m trying this on my ‘mobile’ laptop now. This time around I get this: