I’ve been stuck on an older release of SDL_image, as I haven’t been able to build it after the SVG support was added.
I initially solved a few build issues by just dropping support for things like WebP, but for some reason I can’t disable SVG support by simply dropping the LOAD_SVG preprocessor definition.

To reiterate, everything builds and works up to release-2.0.1, but as soon as SVG support was added I’ve been unable to build, with or without the LOAD_SVG definition.
I’m building on macOS 10.13.4, with CMake and Clang 9.1.0.

Any help would be greatly appreciated, as I’ve been putting this off for far too long.

EDIT: Forgot to include an example build command:

EDIT 2: Looks like libSDL2_image.a doesn’t actually contain IMG_svg.o even if I build it with LOAD_SVG, which is most likely where the issue comes from. It’s dropping the SVG support, even though it really shouldn’t.

So I’ve found the issue, and believe it to be a bug with the SDL_image project.

The Xcode project for SDL_image does NOT include IMG_svg.c with static library builds, but DOES include every other file. This is very likely done by accident, and nobody’s noticed it, until now.

Here’s a screenshot illustrating the issue with the project file: 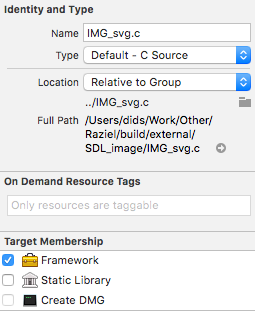