So, for context, I’m running Xcode 11.6 with SDL2.framework, SDL2_image.framework, and SDL2_ttf.framework all installed in my user/Library/Frameworks folder. The project was compiling no problem until I included and tried to initialize SDL2_ttf, now I get a “Command CodeSign failed with a nonzero exit code” error every time I try to run. The issue report looks like this: 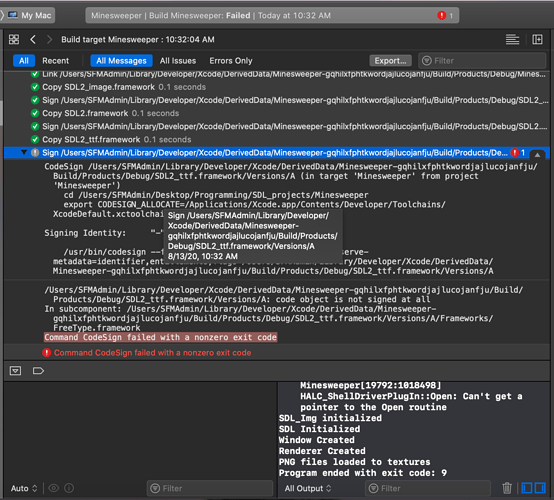 edit:
Xcode doesn’t seem to want to code sign frameworks that are embedded within other frameworks. Manually code signing FreeType.framework should work (see my comment below about not building with a systemwide version that you’ve installed somewhere).

Also, you will 100% want to make sure those are getting bundled inside your app (Xcode should do this for you, but check to make sure; there should be an Embed Frameworks item in your project build settings in the Build Phases tab).

And probably have the non-system frameworks you’re building your app with (SDL2, SDL2_ttf, etc.) inside your project folder alongside the .xcodeproj instead of in ~/Library/Frameworks, so your project version control will have the specific version of those libs it was built with (and also in case you need to manually codesign a framework embedded within another framework).