I don't quite understand how drawing rects to the screen works exactly.

I just need someone to explain how to do it as I am very confused.

I think what you need to do is make a surface and a rect. And that is the extent to which I understand how to draw things to a screen in SDL.

If all you want to do is draw some rects, you don’t need any surfaces; what you do need is:

A window and a renderer for that window can be made using SDL_CreateWindowAndRenderer. Then, anything that you use the renderer to display will be shown in the window.

Rects are rendered by a renderer by first selecting the colour of the rect (using SDL_SetRenderDrawColor), then instructing the renderer to draw the rect using SDL_RenderDrawRect.

I’ve included a full working example below. This example displays a black window with a red rect in it. This example does a few extra things that are very common to do when using SDL:

The call to SDL_RenderPresent is the part that communicates to the renderer “okay, show me everything I’ve told you to draw;” without it, the renderer will accept all of your draw commands but not actually do anything visible.

My example does not have any error handling in it: most of the SDL functions used in the example have a return value that can be checked to find out if an error has occurred. For a simple example like this, I decided to omit error checking to make the intent of the code a little clearer.

The example compiles on my computer using the command:

Running ./example produces a window with the following content: 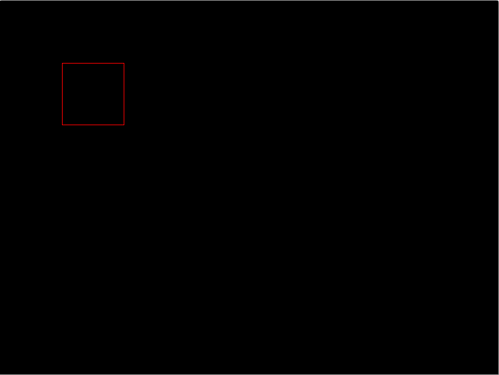 You might be interested in the Lazy Foo’ SDL Tutorials, which cover subjects like setting up an SDL-based project and displaying output in windows. I also highly recommend the SDL wiki, for when you aren’t sure what a particular function does.