In the build path in settings can I just put the SDL-devel file into a folder and put that in? Or somewhere in my C:/program files/quincy do I put the SDL files in.

This is my first time trying to install anyting extra on C, I’ve just been working through a textbook and want to start making stuff, if anyone could help me I would appreciate it, I rather would not use VS code.

It’s hard to say since we cannot see the full compiler command, but the error looks like the order of the libraries is wrong.

The order of libraries should be -lSDL2main -lSDL2. So when you specify which libraries to link, try swapping the order between the two to see if it works.

should I be using x86 since my compiler is minGW?

should I be using x86 since my compiler is minGW?

It depends on what architecture you are targeting, mingw has compilers for both architecture, but your previous screenshot didn’t lead me to believe there was architecture mismatch.

As to your settings, I think you want to use the Linker options: box to specify the linked libraries.

Yeah, so I tried that and I got successful build, but upon trying to run I still am getting this undefined error. 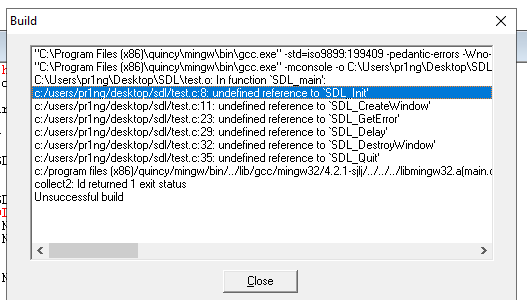 Could you include the whole content of the Build window ? Some lines are getting truncated.

Okay, let’s try something else.

Remove the -lSDL2main and add #define SDL_MAIN_HANDLED before including SDL.h. It does not seem like Quincy lets you specify which subsystem to use otherwise.

Otherwise, one thing to make sure of is that when you pass -lSDL2 to the linker that the first letter is a lowercase L, the font used by Quincy makes it difficult to tell it apart from -I (uppercase i). GCC will silently ignore any -I argument.

Still undefined reference, maybe should I just give up on Quincy and use it for solving textbook problems.

Then use a different IDE for SDL coding?

What IDE would you think is nicer between Visual Studio 2010 or Codeblocks.

I’m not sure why you would prefer Visual Studio 2010 over VS2022. I’m not even sure recent SDL2 version would still function on such an old version because of a breaking change around VS2015 I believe.
On the other hand, Visual Studio 2022 would give you really convenient “one click” setup of SDL.

As to Codeblocks, I have no experience with it. It also uses mingw as far as I know.