I got sent a video from someone who plays one of my games (Slay) via an Oculus Quest. He sent me this

the only obstacle to make it playable on Oculus Quest is the tiny window size that comes by default on Android apps. If that window would be resizable then it would be perfect, plus that you can place it on their app store. I’m suspecting that the only thing needed is to look on their android API definitions to add this support and wouldn’t differ from the usual android version.

Is that something that can be done easily with SDL on an Android version?

I’m not sure that’s the issue. I’m guessing that Oculus can run Android apps, but displays them in a small screen within your view. This really isn’t a big deal, I just wondered if anyone had come across this and had an easy solution.

I haven’t tried this in several months, but last I tried, you can sideload a normal Android .apk package onto an Occulus Quest and it’ll run it in a window in your home environment.

Here is me running the Android port of DragonRuby Game Toolkit at the start of this video, for what that looks like: 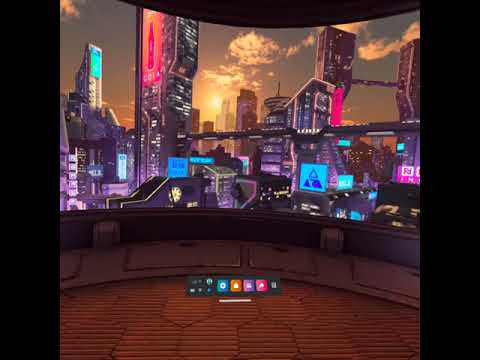 The VR versions of this later in the video also use SDL, but it was a bit more involved.

I don’t think you can extend past that window unless your Android manifest has Oculus-specific stuff in it, and uses either the (deprecated, Oculus-specific) VrSdk or OpenXR, but that’s going to mean writing an OpenGL ES renderer and concerning yourself with more than just getting your game into a window, since you’ll have to manage head tracking and stuff, too.

Also, I’m fairly confident that Oculus is not going to let you sell a game on their storefront that is just a 2D game on a movie screen in front of the player–what the above video refers to as “VR Mode 1”–and, at least last I checked, a long time ago, they weren’t going to just sell generic Android games, even if they run in that little popup in the home environment. But I could be wrong!