I couldn’t come up with a good title for this question.
Here’s the gist of it:
I’m making a game with SDL2. The pixel art is at a very low resolution (around 16 * 16 per asset) and I scale it to a larger screen (about 730 * 360) for visibility.
I used SDL_RenderSetLogicalSize to scale the whole screen, but the results aren’t satisfactory, here’s why:
I guess setting the logical size makes SDL scale the image, then render it to the screen. However, I want SDL to render to the screen, then scale the rendered texture, allowing me to do per-pixel rendering. 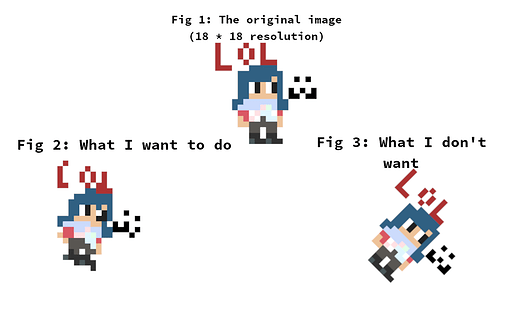 desires1209×741 55.6 KB
Any sane person would think: “Why would anyone ever want to create something as ugly as figure 2?”
The answer is simple. Fig. 3, while it may be more “Aesthetically pleasing” is not what I want. I believe the fact that it’s taking advantage of a higher resolution will already make a game look more modern and less authentic, and yes, the method of scaling I’m trying to achieve can create good results. For instance, look at some gameplay footage of celeste. I also want to be able to “tween” and transform images by their actual resolution, not by their scaled resolution.
Sorry for the rant, but I would really appreciate support. Thanks in advance.
1 Like
meklu June 7, 2020, 5:16pm #2