I’m compiling SDL 2.0.7 (stable) with MinGW 5.3.0 (MinGW-W64) on Windows 10.
I’m linking against: -lmingw32 -lSDL2main -lSDL2 (are there any I’m missing?)
(Note this is just a test project to get it working. It’s just: http://lazyfoo.net/tutorials/SDL/20_force_feedback/index.php
with a few minor changes (i.e. removing SDL_image and using SDL_LoadBMP instead).

The debugger is telling me it crashes in SDL_dinputjoystick.c, in EnumJoystickCallback, though I don’t know precisely where (the debugger says line number 397, but I think the last two stackframes are wrong… The secondmost stackframe doesn’t match up with the function name it’s supposedly in).

I’ve tried with two different DirectInput gamepads (a non-XInput Logitech and a PS4 controller) - both crash it. The Xbox 360 controller doesn’t crash, however, and works fine, being XInput.

I’m completely at a loss of how to proceed from here.

What confuses me, is with the line it (supposedly) crashes on I don’t see what could possibly make it crash:
dipdw2.diph.dwSize = sizeof(dipdw2);

I have zero idea why and am really confused by this behavior.

It looks like a memory corruption: a functions write to a memory location which belong to something else.

When you add a printf (or any other function or a variable) you modify the memory layout so the corruption affects an other object.

Most memory corruption are due to a “double free” or “use after free”. You should review your memory management. There are also tools to help you such as address sanitizer: https://clang.llvm.org/docs/AddressSanitizer.html (available for Clang and GCC, but not MinGW).

Memory corruption is a good thought, but to be sure it’s not on my end, I made the code as minimalist as possible.

A fresh build from the latest repository, with no changes to SDL’s source, still crashes on the same line, even with this code:

If no-one else is encountering this issue, it must be a problem on my end, but I’m not sure what. Maybe I’m compiling SDL wrong, somehow? I use CMake to generate the makefile, and mingw32-make to build it.

Naw, that’s the correct folder that I named when copying SDL’s headers to where I wanted them - the same folder that I tell MinGW where to find SDL, which it does do successfully.

I’m pretty sure it wouldn’t be able to compile if it wasn’t correct (even if SDL 1.x was installed at the location - which it isn’t - I don’t have SDL 1.x’s headers on this machine), so I don’t think that’s the issue.

What is the error you get when your program crash? I guess a segmentation fault because pContext is NULL (even if the backtrace show the wrong line). SDL_SYS_JoystickDetect() pass the address of a variable on the stack to SDL_DINPUT_JoystickDetect so it shouldn’t be NULL.

You can try to put a breakpoint on EnumJoysticksCallback(), check that pContext isn’t NULL yet. Then put a watchpoint on pContext with the watch command. gdb will automatically stop when something try to write to pContext, print the backtrace and you get the name of the function that corrupt the memory.

Yea, it’s a segmentation fault - I should’ve mentioned that, oops!
I really appreciate the help you’ve provided, thank you.

pContext is passed into EnumJoysticksCallback null, I think. Leastwise that’s what MinGW’s GDB is showing.

Following it back, it’s null in SDL_DINPUT_JoystickDetect too, though that’s a pointer-to-pointer and GDB is for some reason showing it just as a regular pointer.

Which is weird, because the code that calls SDL_DINPUT_JoystickDetect looks like this:

…so pContext should be a non-null pointer pointing to pCurList, and pCurList should - I think? - be null.
I can’t see where SYS_Joystick is being initialized though. The debugger says it’s null, but I don’t see why it isn’t gibberish (other than debug build).

But it doesn’t seem to be crashing on pContext anyway - it doesn’t even reach it. It really does seem to crash on dipdw2.diph.dwSize = sizeof(dipdw2);, though I haven’t a clue why! 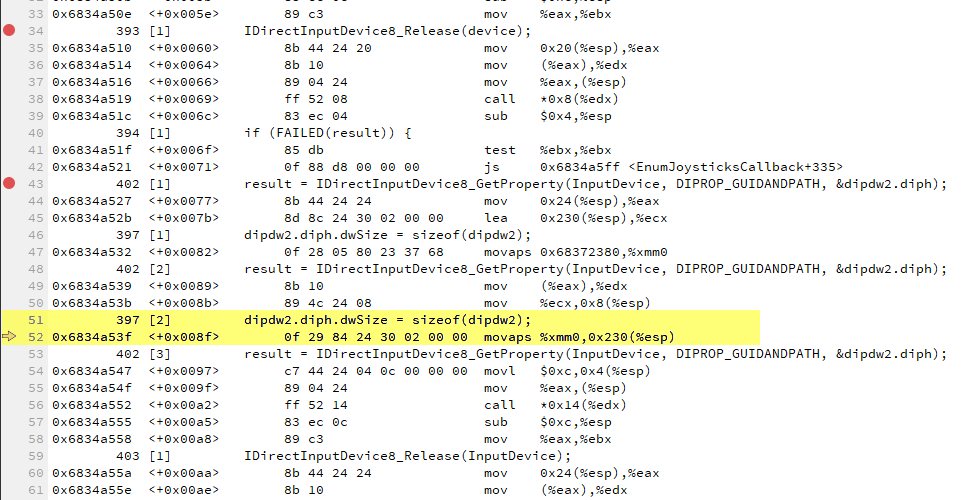 It must be something weird on my end, probably with how I’m compiling SDL, or the compiler settings on MinGW.

Anyway, I was looking into using SDL purely for gamepad support for my SFML application, but I’ve ended up solving my gamepad-related needs via a different method (just coding a button/axis mapping system myself), and so I no longer need SDL for that.

Thank you for your help - while I’m curious about the cause of the crash, I don’t want to waste more of your time than what you’ve already generously provided. I really do appreciate it!

It really does seem to crash on dipdw2.diph.dwSize = sizeof(dipdw2);, though I haven’t a clue why!

Crashing on a movaps instruction is likely to be due to an alignment error (although I might have hoped the message would be more specific than ‘segmentation fault’). In this case, if the stack pointer esp is not 16-byte aligned that instruction will fault. If that’s the cause it could result from any function in the call stack failing to maintain correct stack alignment - so it could be a long way away from that code!

Is your compiler up-to-date? If there’s a later version than the one you are using, I would suggest trying that to see if it helps.

I’m using MinGW 5.3.0, compiled by the MinGW-W64 project, shipped with QtCreator (the IDE I use) - there are newer versions available, though I wasn’t going to upgrade for another few months…

I’ve been using this MinGW install very heavily since last September - four months ago - and nothing else has noticeably gone wrong (including compiling and actively using SFML, Boost, a few smaller dynamic libs, and my own static libraries).

It’s possible my MinGW install is borked, and I do have multiple versions of MinGW installed, so it’s feasible that the commands I’m issuing to build SDL are accidentally being picked up by a different compiler version than the one being used to build the project, maybe creating an ABI mismatch… Odd that this hasn’t occurred with any other library I’ve built, though, but weirder alignment of bytes have occurred.

Whenever I do get around to updating my compiler, in several months, I’ll uninstall every compiler I have installed, update to the latest MinGW, and then I’ll try building and running SDL again.
I can’t do that right now, though, so I guess that puts this at a dead-end for the time being.

Thank you again for the help, gents, I’ll have to revisit this issue in the coming months.

I can’t do that right now, though, so I guess that puts this at a dead-end for the time being.

Did you get a register dump with the crash report? If so, look at the value of esp at the time of the crash; if it is anything other than a multiple of 16 (i.e. the hexadecimal value doesn’t end in a zero) it confirms this as the cause of the crash. It doesn’t tell you why the stack pointer is misaligned of course, but it takes you forward. If it is a multiple of 16 then this is a red herring and the cause is elsewhere.

I don’t have a crash dump, but I do see the register values at the time of the crash while stepping through it.

So the alignment fault is definitely the cause of the crash (had the compiler generated the movups instruction rather than movaps it would have worked). Unless you are linking in some binary code created in a different tool chain, it is suggestive of a compiler bug.

Thank you - it’s very good to know the cause.