I’m very new to SDL2 (Uni student), so I apologise if this is something super-simple, which I suspect it will be, but here goes.

I am trying to render this texture at an angle relative to the Mouse cursor location. The texture renders in the correct place using the correct Rect, but it does not rotate

There is more code than this but I cut it out so you can see what I’m trying to do.

This is the result

: The mouse was in the center of the window (Windows doesn’t capture mouse in PrintScreens 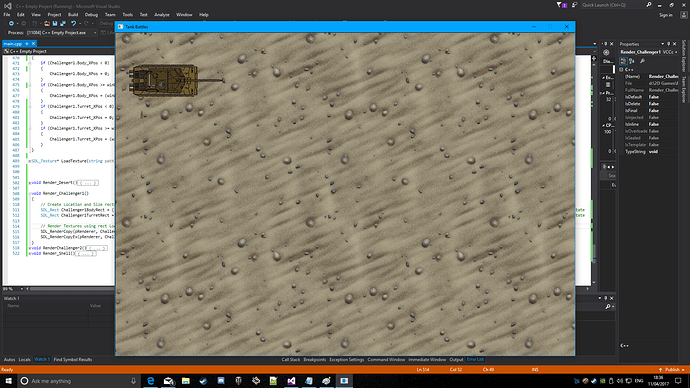 To figure out the angle your turret should be rendered in, you can do this:

This will require knowledge about vectors and some linear algebra.
Let me know if you need example code for a 2D vector class.

It’s just a quirk of C and C++ that this compiled; a list of comma separated values like this will take the last item, so in this case, it’s equivalent to writing…

…but that wasn’t what you wanted here either. And the SDL_GetMouseState call will give you the same values that are already in event.motion.x and event.motion.y, but you never hit this because it’s unlikely you ever landed in that case statement, since SDL_MOUSEMOTION happens to be 1024, and you probably didn’t ever get that Y coordinate.

C and C++ can be cruel, since they let these things go without even a warning sometimes.

Now the tank will be exactly where the mouse cursor is when you draw, which might not be what you wanted, but it will tell you if you’re getting correct values. From there, @Daniel1985 gave a good overview of calculating an angle, so you can swap out the tank position for a calculation that gives you what you want for TrueAngle.

I have a few questions as I am not familiar with some terms used in your reply.

When I enter CVector2D m_PlayerPosition, I get CVector2D is undefined. I’m new to SDL, C/C++ and only familiar with C# and I’ve never learned Vectors. Do I need a declaration to get this working?

Is DeltaTime pre-defined? I don’t see it declared. It’s new to me also

I’ve not been introduce to -> or f labeled in some of your declarations.
After reading up, I found -> means into or to. e.g string->list would mean “string to/into list” and f means “format/formatted”. I’m a but unclear on the latter. Please correct me if I’m wrong.

Also, what is the use of (void) as a parameter in functions? I was taught to leave it blank as in void Render() if no parameters are passed.

Sorry for the question, but I’m not familiar with those yet. Thanks a lot

CVector2D is external class which I’ve written to help out with positioning (among other things) the object in the game. So in my code I have several CVector2D objects holding the player’s (the turret’s) position, size and such.

The DeltaTime varible is a float (decimal) variable that is passed to the update function, which holds the time between the current frame and the previous frame. By multiplying the position update with this variable, I get the same speed on different computer, since I don’t want the game to run faster/slower on a faster/slower computer.

And finally, here are some links to information you might need to read up on:

Deltatime (sorry for the awful choice of background color vs text color):
http://www.aaroncox.net/tutorials/2dtutorials/sdltimer.html

I will post a simple 2D vector class below, which you can just add to your project and use.
Don’t forget to add #include “CVector2D” at the top of your project when you’ve added the new class and wish to use it.

Just create a new class inside your project and copy paste the code above into your header- and source file.
The indentation screwed up a bit, sorry about that.

Thanks, I will try and implement this

When calling this line:

I get Identifier "X" is undefined

I fixed the “PlayerSize” error.

You need to understand that my code above (my first reply, showing how to calculate the angle and such) is just example code on how you can do it. Psuedo code if you will.
The ‘m_pInputManager->GetMousePosition()’ is just my representation of getting the mouse position and ‘MyTexture->Render()’ is just my representation of rendering an SDL_Texture.
You need to use the code you’ve shown in your first post and work from it.
Since you now have the 2D vector class (which I assume you’ve implemented correctly in your project), you can rotate your texture properly if you first fix the issues that @icculus have stated above and then use the calculation which I’ve given you in my first post.
Once again, you can not just copy-paste my code above and assume it to work.
You need to have your own way of getting the mouse position, calculate the direction and the angle of your turret and then render your texture (which you already do in your Render_Challenger1() function).